What She Said Radio 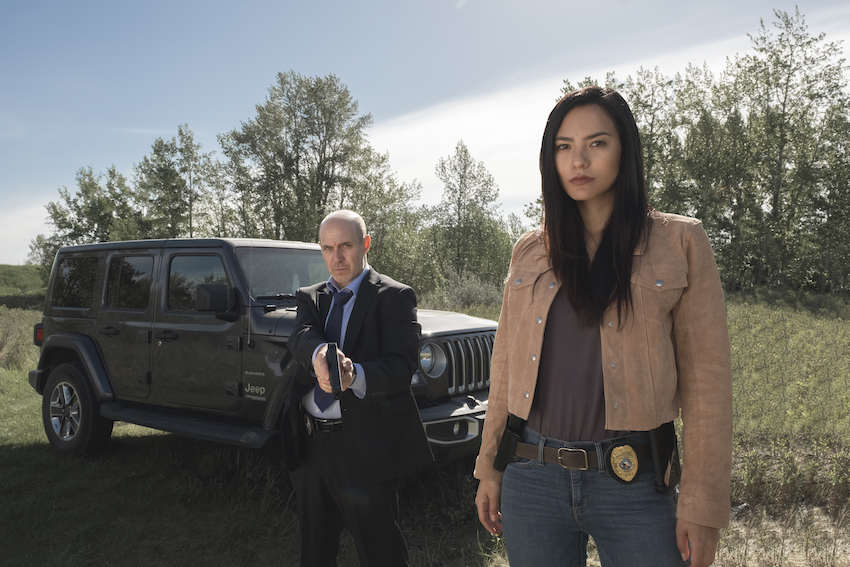 Jessica Matten is a Cree and Metis actor from Alberta best known for her work on Blackstone, Frontier, Burden of Truth and the influential short A Red Girl’s Reasoning now being adapted as a feature film. Matten makes television history in the new series Tribal on APTN.  She plays Sam Woodburn, a newly appointed Tribal Police Chief suddenly thrown into the good old boys’ club thanks to a new federal law expanding her purview. Tribal looks at issues on the forefront of the native experience in Canada including racism, the pipeline, murdered and missing women and healing lodge justice. The series created by Ron E. Scott is fresh and original and reverses stereotypes and Matten has high hopes for its future.   I spoke to her from Los Angeles.

You’ve made history as the first indigenous female Police Chief in television history!

How cool is that? I’m so happy to be a part of it, and I’m so grateful.

Sam’s the newly appointed Tribal Police Chief over four reserves, but her area is extended to the city.  What are the implications of this new federal ruling?

It means all of a sudden, we are living between two worlds not just physically but culturally, and she’s dealing with two different world and their prejudices. Its interesting, she is half native, so she sees it all.

Her partner Chuck is a bit of a doofus.  He’s openly racist and sexist. Can Sam change him or is he a lost cause?

I believe he can change like anyone in the world people has their opinion and that’s fine. Other cultures fear because of not knowing, having awareness, Tribal is about creating awareness.  There is nothing to fear with native people. We share the human experience. I’m excited about this week’s episode as Sam calls him out on the harsh things he says.

The series looks at her relationship with her mother and late father, as well

Rob and I were talking about the show three years ago he reached out and said I’m going to do something completely opposite. I want Sam to come from a good family. Her parents are well-off, not the stereotypical broken family. Sam’s boyfriend is an attorney, we wanted to flip the script on that. There are going to be issues, my mum and I have an underlying resentment yet to be explored. Like any family, they love each other to death but always there is always something.  We made their situation realistic.

Sam faces resentment as a woman in this power position, no big surprise. How does she deal?

My experience growing up native and living all my life on and off reserves and working in isolated places across Canada, I had to be a strong person going against the grain, not fitting in, not being perceived as being cool.  Also coming into the film industry was tough. You have to build and that’s what’s fascinating about Sam.

What I also found fascinating is the reason Sam isn’t phased by these boys’ clubs because its not her first rodeo. This is what people don’t know. When RCMP becomes trainees in Canada, they spend time in a native community. What they experience on a reserve they won’t see in their lifetime. They’ll see the repercussions of colonialism in Canada, the impact of murdered and missing women. Sam’s been through that but it’s not said.

That’s it, in so many films, you never want to put it out there, being against them and vice versa. I do what I do because its all about love, all one and the same country built on understanding.  Teach it now. Not to dwell in the past issues, but how do we move forward in society in the world with internet access and cars, we don’t live in teepees anymore.

Tribal has tremendous potential for provocative storylines, and education, the pipeline for instance.

I find it eerily serendipitous that Tribal is airing now to inform people what’s going on and how intricately connected it is, honouring land never given to the Canadian government. The social impact it will have in native communities, building the people line. That’s also the area where women go missing, in the unceded territory and lands. It’s interesting, I glanced at a TV monitor showing a national Canadian news channel on the economic impact of the blockades, not the social implications. Most countries will always think of the economy before our people. What we’re saying is how we choose to treat our women and girls in Canada, a country where we have been mistreated.  We need a strong economy, but we always think about the pipeline and I honour and value the protesters and risking their lives. Tonight, we’re airing the episode called Indian Giver and touch on that topic and hint about racism.

Congrats on renewal for Season Two, especially after only two broadcasts!

It’s so cool, I just hope with the second season, there will be more exposure and we can take it to the US. fans have been asking me about the show because it’s so different, and they want to see it.  And maybe it could go further, and we would find a character like Sam become a superhero, a Marvel character!

Tell me about Lemon Cree, your initiative.

My mother and I created Lemon Cree across Canada. We go into native communities and teach fitness and wellness, suicide prevention If there is nothing negative happening in a community, I inspire them to chase their dreams. My mother is a fitness instructor and she saves lives, people lose 100 pounds and quit addictions, lose their diabetes medication. There are so many success stories, people become trainers and pass along what we teach. Its close to my heart and fuels and motivates me. In the film industry, I try to set a positive example.