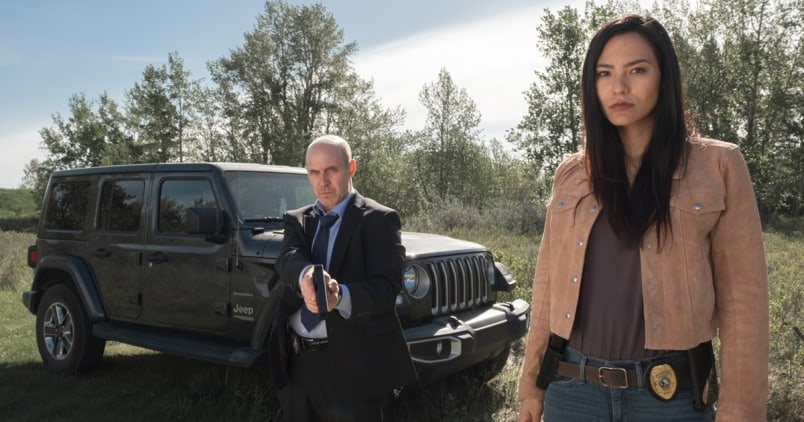 Brian Markinson is drawn to ugly characters — and Buke, the character he plays in the new APTN series Tribal, certainly falls into that category.

“I’m drawn to the challenge of challenging an audience to empathize with characters who, on the page, may not seem terribly worthy of empathy,” says the Vancouver-based actor, whose lengthy list of credits includes plum roles in Mad Men, The Romeo Section, Unspeakable, Charlie Wilson’s War and the Arts Club’s 2017 production of Angels in America, in which he played the real-life character Roy Cohn.

Characters don’t get much uglier than Cohn, who was Senator Joseph McCarthy’s chief counsel and represented Donald Trump during the latter’s early business career — but Tribal’s Buke might come close, at least at the outset.

Tribal premieres on APTN on Feb. 20 and is showrunner Ron E. Scott’s first outing after his critically acclaimed Blackstone concluded in 2015.

Tribal stars Jessica Matten as Sam Woodburn, a young Indigenous woman who is appointed Chief of Tribal Police in the wake of a corruption scandal and finds herself forced to partner with Buke, a grizzled, racist, angry white cop from the nearby Metropolitan Police Force.

Markinson describes the Calgary-shot series as a “character-driven procedural.”

“It may start out as a crime-of-the-week procedural, but we have a more over-extending arc to the show that is about where these two people start in their relationship, and how these parallel lines end up skewing towards each other a little bit to the point where, towards the end of the season, they start trusting each other,” says Markinson.

Tribal premieres in a month that has seen mass protests and arrests across Canada related to the dispute in Wet'suwet'en territory over the proposed natural gas line. The gulf between the Canadian government and First Nations communities has never been more pronounced; Tribal explores this historic tension through Sam and Buke’s unlikely partnership.

“Sam is this very strong, very smart Indigenous woman who navigates through this world, much as her people navigate through this world where they’re dominated by white people and white politics,” says Markinson. “But we get to see, over the course of this first season, that mutual understanding is possible. If you can’t empathize — if you can’t put yourself in the shoes of another person – the gulf is never going to be bridged.”

The material is admittedly heavy, but Markinson also speaks about Tribal with a lot of joy. He describes the Calgary set as “the happiest set I’ve ever been on,” and he attributes the joy to showrunner Scott.

“Ron is personable, and he’s a dreamer,” says Markinson. “He’s a guy you want to get into the trenches with. We had 39 days — we lost one day to the Edmonton fires — so one day short of eight weeks to shoot eight, one-hour episodes. I looked at the schedule and I didn’t think it was possible. And Ron, he got it done. He’s an eternal optimist. He’s a problem solver. He’ a great writer and he has a lot of stories to tell. He’s not precious at all.”

Markinson wasn’t the only Vancouverite who made the trip to Calgary to act inTribal. John Cassini (Intelligence, Robson Arms, Daughter) also appears in an especially dark role.

Tribal has already been renewed for a second season. Markinson is chomping at the bit to return to Buke and his ugly-but-shifting POV.

“I really came to Tribal as an outsider, which I was,” says Markinson. “I’m a white North American male, and even though my politics are quite progressive, I had no idea about a lot of things. It was really educational for me. In the theatre, we do these land acknowledgments, but what do they mean? It means that everywhere you look is unceded territory. It’s all their land. So whatever can be done to improve relations and make things right and give these communities a voice is what has to happen. Television can do that. Art can do that.”

Tribal premieres on APTN on Feb. 20. Details at aptn.ca/tribal