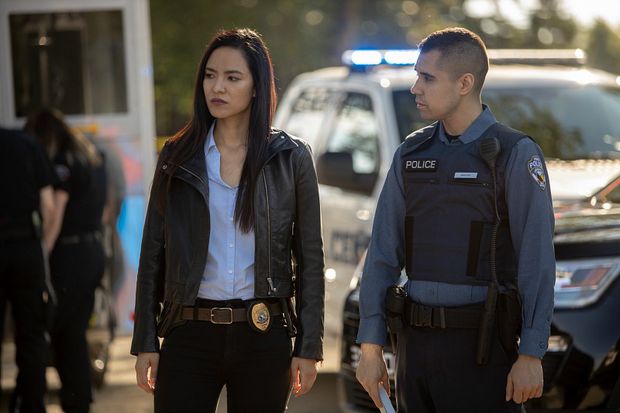 Well, Tribal (starts Thursday, APTN, 9 p.m.) makes you think again. It offers you the basic template and then shifts the emphasis. The “whodunit” element is almost tossed aside. That’s not what matters. What’s important is the texture of the conversations, the simmering moral judgments, social ridicule and ostracism. It’s a minimalist police procedural that sometimes hits you like a slap in the face.

It’s created by Ron E. Scott, whose previous series, Blackstone, is the most underrated Canadian drama of the past decade. As a dark neo-realist drama, it was uncompromising in its depiction of ordinary life in a fictional Alberta First Nations reserve. Scott, a member of the Métis Nation of Alberta, has described Tribal as “more accessible," and it certainly is that. Also admirably brisk and lacking in the superfluous melodrama that often weighs down police procedurals.

The opening episode moves at a sprinting pace. Officer Samantha (Sam) Woodburn (Jessica Matten, who also appeared in Blackstone and is a regular on the CBC’s Burden of Truth, is made interim chief of a tribal police force. Some shenanigans by the federal justice department have meant the tribal force is sort-of integrated with the local urban force and Samantha finds herself partnered with Chuck (Buke) Bukansky (Brian Markinson), a bristling but almost broken-down veteran detective.

The pair will tackle cases that involve a First Nations person or issue. And on their way to their first case, Sam pointedly wonders aloud why there is no conversation in the car. Buke snorts and says, “You’re a face, you’re an [expletive] and an Indian, you’re what they need right now. As soon as you screw up, you’re going right back to the reservation. How’s that for conversation?”

The case itself is emblematic. A teenage boy discovers that his ex-girlfriend is in a sex video that’s gone viral, and with his drunken buddies is convinced to make a ruckus at the young woman’s house. Bottles are thrown, a couple of shots fired. But there’s a fatality. It’s all anchored in stupid male rage, pointless bravado and almost whimsical prejudices.

On the evidence of the first few episodes, the series is cleverly freed from the usual clichés and narratives by cementing itself as character-driven. Sam is no saint, and in the opening episode it becomes clear why the show is labelled as “mature” content. The games Sam plays with her boyfriend are, well, complicated. (Matten is fiercely good as the multilayered character.) And Buke, played with tremendous gusto and severity by Markinson, is no one-note dinosaur cop. He’s ill, he’s an addict and fragile behind the ferocity.

The interaction between the two lead cops is the focus here. Sam is neither the glamorous, strong First Nations woman first presented, nor is she the stoic figure familiar as a cliché. There’s a streak of perversity there. And the perversion is not the kind of corruption that led to the ouster of the previous chief of the tribal police, a figure who haunts the series. Everyone has strange baggage here.

The series touches on contemporary issues startlingly relevant to anyone who follows the daily news in Canada. It is emphatically set in an Indigenous world and brimming with Indigenous voices. (The series was filmed on the Tsuut’ina Nation and in and around Calgary.) There are few scenes of lashing-out on issues, mind you, and mainly this eight-episode series is a stark, unfussy cop show more about the prevailing mood of the drama than it is issue-driven or even about catching criminals.

APTN describes Tribal in its own terms: “This new drama series follows an Indigenous ‘tribal’ police force and the four First Nations communities it oversees. They must work together to prevent colonial control from resurfacing.” Fair enough to frame it like that, as a provocation. It’s a pugnacious crime procedural, highly unusual for its tart tone, and highly recommended. And it couldn’t have arrived at a more auspicious time.