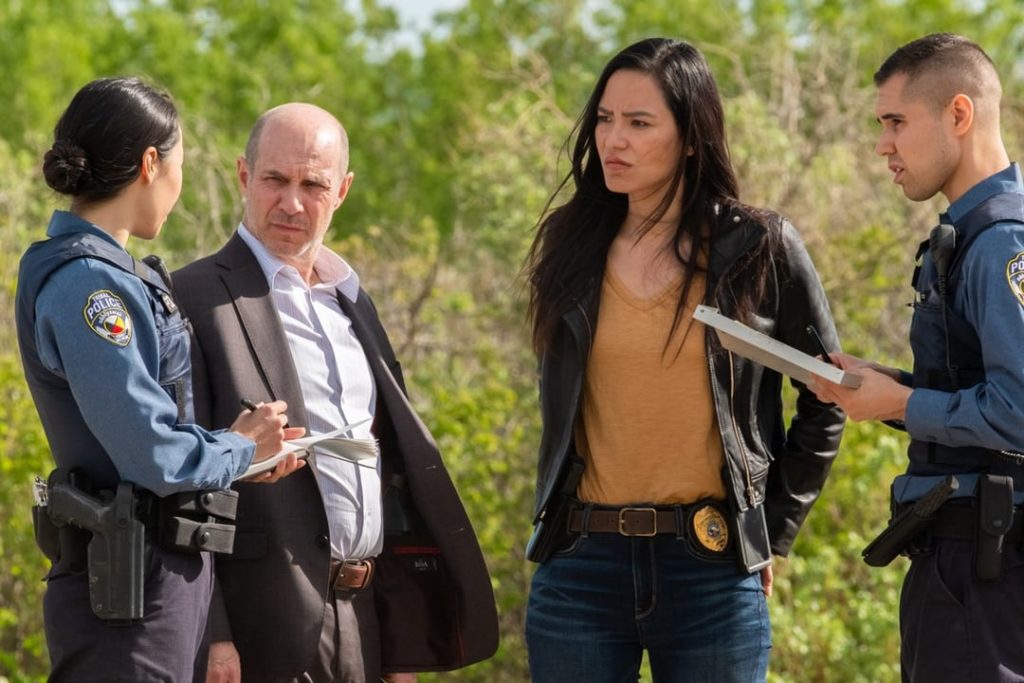 Pat Chau‍
As an actor in Alberta, you need to wear a few hats if you want to be on set all the time. I recently worked as a background casting assistant on the new First Nations crime drama series Tribal, which is shot and set in beautiful Calgary, Alberta. Please enjoy my interview with two of the leads, Jessica Matten, who plays police officer Sam Woodburn and Michelle Thrush, who plays Sam’s mother Jackie.

‍Pat: What does it mean to you to be in Tribal?
‍
Jessica:
I am deepIy honoured to be playing Sam Woodburn in Tribal. She’s an Indigenous female hero who protects people every day. She’s chosen to live a life of integrity as a woman of colour in a man’s world. For decades, there have been many native women in the police force – sergeants, lieutenants and leaders. My Sam character exists in the real world.

Michelle:
Creator and showrunner Ron Scott and I worked together on Blackstone and Mixed Blessings. Prior to the production of Tribal, we talked about me shadowing him as a director on the show. He later offered me a role on the show too, which I wasn’t expecting. While shadowing, I was able to learn so much from both Ron and Jonathan Benny, our director of photography. At the same time, I was also challenged by my role as Jackie as she’s a type of character I’ve never played before.

MY COMMUNITY IS DEMANDING TO SEE OURSELVES REFLECTED BACK AT US ON SCREEN.

Do you see enough of your culture reflected back on the airwaves?

Jessica:
We are in a brilliant time right now where diversity is being honoured, admired, appreciated and respected. When I first started in this industry 10 years ago, they didn’t know what to do with my “look,” meaning my ethnicity. I don’t have that problem anymore with storytellers being given the opportunity to tell their truth. My community is demanding to see ourselves reflected back at us on screen.

‍Michelle:
I’m beginning to see it, but our airwaves have not yet caught up. A lot of my friends are working on Indigenous projects, so I feel it’s going to get better. We have brilliant Indigenous writers, directors and actors breaking out in the industry and who are really shaking things up. It’s an interesting time for storytelling and it feels like we are just beginning to start creating change.

As actors, do you feel respected in the industry?

Jessica:
I feel like people need to remind each other about how to respect each other — in every field of work and in every industry. I’ve had many careers outside of acting and I especially feel this way as a woman. I’m grateful to women AND men who stand up for equality. Yes, I do feel respected in this industry, but that’s also because I demand respect (in a respectful way!). And I don’t care what your job title is – everyone deserves to be treated equally on set.

‍Michelle:
I can only speak for myself. I feel respected by my peers and I have had the chance to work with some amazing crews over the last 30 years. I have had to deal with issues of cultural importance, but a lot less now than I had to years ago.

DO YOU SEE YOURSELF AS A ROLE MODEL?

Jessica:
I do. As a teenager, I spent my time outside of school running wellness workshops with my mother to help native women combat self-esteem issues and set goals in their lives. At the age of 15, I set up my own workshops across Canada called “Positive Beauty” to help female, male, LGBTQ, non-binary and two spirit individuals figure out what they wanted to do with their lives. My entire life, I’ve always known it’s my job to help my Indigenous communities.

NOW WE HAVE THIS NEW GENERATION OF ACTRESSES RISING UP BECAUSE WOMEN LIKE TANTOO CARDINAL KICKED THE DOOR DOWN FOR US.

Should Tribal be seen around the world, or do you feel its Indigenous focus means it really should be directed primarily at Canadians… or even more tightly focused on Indigenous Canadians?

Jessica:
I do believe Tribal is a show for international audiences. It will help to inform everyone we are all one in the same. Simply put, we are products of our geographical origins. The pigment of our skin is reflected by where our ancestors, our family members, were raised and our bodies are shaped based in that. In my opinion, all of the labelling and categorizing is just another form of trying to separate us. At the end of the day, we are all stronger together.

Michelle:
Tribal needs to be seen beyond our borders. It’s about human stories with female Indigenous leads. When I was a kid, I never saw Indigenous women portrayed in a strong, kick-ass proud way. Now we have this new generation of actresses rising up because women like Tantoo Cardinal kicked the door down for us.

If you had the power, what would you change about Canadian television?

Jessica:
I would love to see larger Canadian networks support grittier shows. My producing friends have pitched such shows but they’ve never been picked up because they are deemed “too edgy.” I want Canadian shows to compete with American and international shows. I want Canada to be respected.

THE MORE SCREEN SPACE WE INHABIT, THE MORE VOICES WE BRING TO THE CONVERSATION AND THE LESS SPACE THERE IS FOR RACISM.

What’s the importance of showing diversity on screen?
‍
Jessica:
To reflect the truth of our world as human beings.

‍Michelle:
As artists, we have the ability to enter into people’s hearts, to create change and break down barriers. I am a firm believer the arts hold much power to shape society, whether it’s theatre, print, film or television. For many years, that power has been largely held for white actors but it’s now being called out and we are shifting forward.

What is great about shooting in Alberta?

‍Michelle:
The landscape is breathtaking with the mountains and the badlands. The crews are friendly and hard working. The facilities and our brand-new, world-class film centre is bringing in a number of international productions. And we’re just cool people here in Alberta.

Michelle, when will we see your directorial debut?

Michelle:
Not sure yet… still honing my skills but looking towards next year to start throwing my hat in the mix!
‍

Pat Chau is a Calgary-based actor known for his work on Hudson, El Chicano and Still/Born. He is the Vice-President of ACTRA Alberta South. In addition to performing, Pat is an assistant director, a casting director and a background performer wrangler.

‍Jessica Matten can be seen on Frontier, Blackstone, Mohawk Girls and Burden of Truth. She also starred in the short film A Red Girl’s Reasoning where she embodied vengeance against the very real problem of missing and murdered aboriginal women in Canada. This year, the Hollywood Reporter named Jessica to its list of Canada’s Emerging Entertainment Talent.

Michelle Thrush is a Calgary-based performer and producer known for her work on Pathfinder, Bury My Heart at Wounded Knee, Dead Man and Jimmy P: Psychotherapy of a Plains Indian, which was nominated for Palme D’Or and César awards. Michelle won a Gemini Award for Best Performance by an Actress in a Continuing Leading Dramatic Role for her portrayal of Stoney in Blackstone.
‍
Top Image: Brian Markinson plays Chuck “Buke” Bukansky and Jessica Matten plays Samantha “Sam” Woodburn. Photo: Michelle Faye Fraser. Photos courtesy of Tribal Productions Ltd.