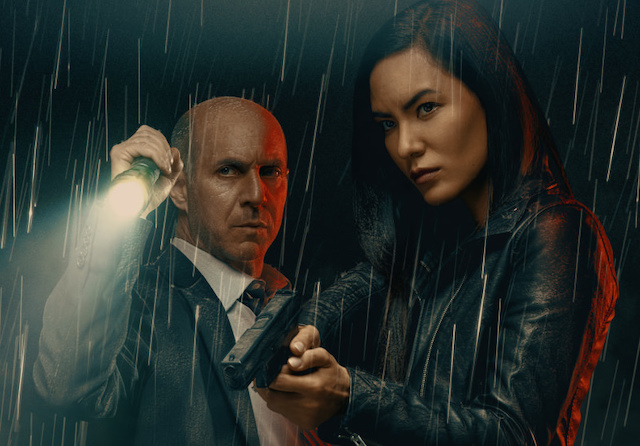 While she’s had numerous offers to play characters that were essentially stereotypes of Native women, Jessica Matten finally landed her dream role in Tribal, a new APTN police series that “flips the switch” on the cop genre.

Airing February 20, Tribal is a drama about a controversial interim chief of the Tribal Police Force being forced to partner with a white, big-city male cop. Bound together to fight crime amid government allegations of corruption, Chief Samantha Woodburn (Matten) and partner Chuck Bukansky (Brian Markinson), a seasoned but broken-down Metro Police detective, investigate First Nation crimes that are ripped from actual headlines. This eight-episode series will see the duo take control of the Tribal Police Force that oversees four Indian reserves surrounding the city while Woodburn tries to overcome political red tape and prove herself to the old-white-boys club of the Metro Police.

According to Matten, the role is a dream come true. Known to many in Eeyou Istchee, Matten has been on the land with Lemon Cree – her mother, Theresa Ducharme, runs the company and Matten has worked on and off for the family business for years.

After moving to Los Angeles 10 years ago to kickstart her acting career, Matten says this is the role she has been holding out for. While she has been in numerous TV productions, including Frontier, Blackstone and Burden of Truth, Matten has always been cautious about not taking roles that depicted Indigenous women as overly sexualized or substance abusers. Instead, Matten describes her Woodburn character as a happy, well-adjusted individual with a stable home and successful parents.

“I can’t be the only person out there who wanted a female Native super-hero. She exists and she has to exist. Since I started in this industry, that has been my goal,” Matten said.

Matten said she had discussed the concept for her character with show creator Ron E. Scott for several years before the production ever got off the ground.

“He said he wanted to flip the switch and have my character not be the cliché cop or Indigenous woman who’s been jaded by her upbringing. In the media, there seems to be just one view that Indigenous people come from broken families, but that’s not true for every Indigenous family out there,” said Matten.

In Tribal, it is Woodburn’s white partner, Chuck Bukansky, who carries the heavy emotional baggage.

Like her mother, Matten is a fitness fanatic. She says people have long asked her why she was “training so hard”, but she sees it as a means of preparing for the roles she knew were coming. She had faith that one day she would get to portray the strong, tough, dynamic hero who the world needed to see – she just needed that break.

During the making of Tribal, Matten also acted as a cultural consultant with the show’s writers to help develop her character.

“I knew that I was going to be that person who was going to educate non-Indigenous people in the film industry about who we are,” said Matten. “The diversity movement is still very new. No matter what, it is still a bunch of white writers in the room who mean well. But unless you have walked the walk, you will never fully understand another culture’s perspective. I am lucky that everyone I worked with was supportive and willing to have an open dialogue and change the script.”